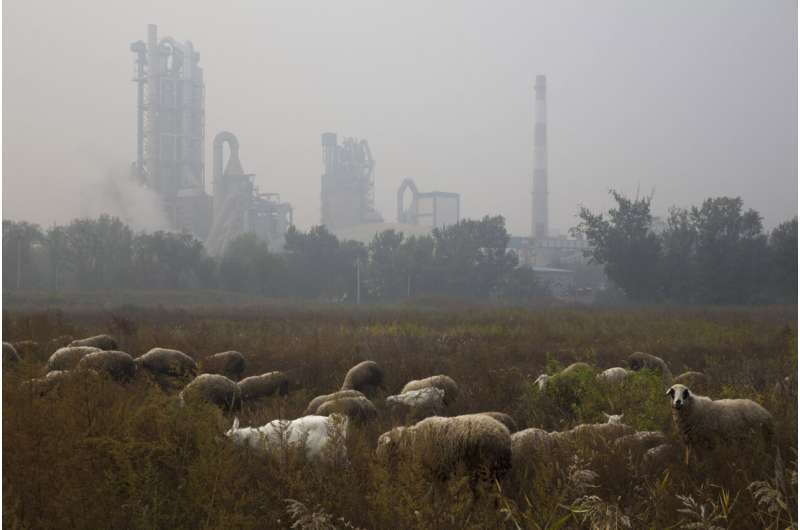 In 2021, worldwide emissions from making cement for buildings, roads and other infrastructure hit nearly 2.6GtCO₂ (billion metric tonnes of carbon dioxide), which is more than 7% of the global carbon emissions, according to emissions scientist Robbie Andrew of Norway’s CICERO Center for International Climate Research and the Global Carbon Project.

Driven by China, global cement emissions globally have more than tripled since 1992, recently growing at a rate of 2.6% a year. It’s not just that more cement is being made and used. At a time when all industries are supposed to be cleaning up their processes, cement has actually been going in the opposite direction. The carbon intensity of cement—how much pollution is emitted per tonne—has increased 9.3% from 2015 to 2020, primarily because of China, according to the International Energy Agency (IEA).

Cement is unusual compared to other major materials, such as steel, because not only does it require a lot of heat to make, which causes emissions, but the chemical process of making cement itself produces a lot of CO₂. The recipe for cement requires lots of a key ingredient called clinker, the crumbly binding agent in the entire mixture. Clinker is made when limestone, calcium carbonate, is taken out of the ground and heated to 1480 to 1540˚C (2700 to 2800˚F), to turn it into calcium oxide. But that process strips CO₂ out of the limestone and it goes into the air.

“Each person on the planet is consuming on average more than a kilogram (2.2 pounds) of cement per day,” said University of California Earth systems scientist Steve Davis. “Obviously, you’re not going to, you know, Home Depot and buying a sack of cement every day. But on your behalf, the roads and buildings and bridges out there are using more than a kilogram. And that’s kind of mind boggling to me.”

Even though there are greener ways to make cement, cutting its emissions dramatically is so difficult and requires such a massive change in infrastructure and the way of doing business, the IEA doesn’t envision the cement industry getting to zero carbon emissions by 2050. Instead there will still be emissions from cement, steel and aviation that need to be balanced out with negative emissions elsewhere, said IEA researchers.

“These are hard, hard to cut,” Andrew said.

IEA’s Voss said the switch to green cement “is not there yet” because of technology, infrastructure and other concerns. But many in and outside the industry are working on the problem.

China is key because it produced more than half of the world’s cement emissions in 2021, with India a distant second at about 9%, Andrew’s data shows. The United States spewed 2.5% of the emissions from cement, ranking fifth behind Vietnam and Turkey.