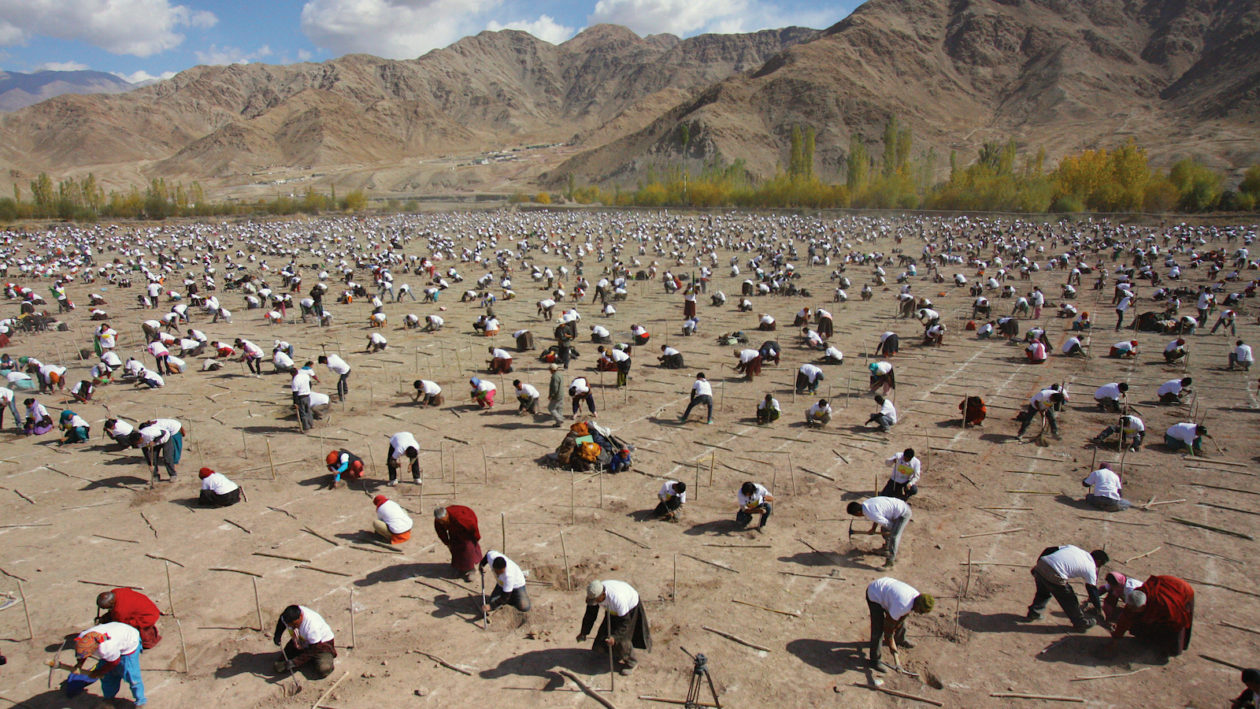 Everybody likes trees. There is no anti-tree lobby. A global push to go beyond conservation of existing forests and start creating new ones goes back to 2011, when many of the world’s governments, including the United States, signed up to the Bonn Challenge, which set a goal of restoring some 860 million acres of forest globally by 2030. That is an area bigger than India, and enough to soak up 1.7 billion tons of carbon dioxide annually, adding almost a quarter to the current estimated forest carbon sink.

But the very unanimity of support for tree planting may reduce the impetus for detailed audits or critical analysis of what is actually achieved at each project. The paucity of follow-up thus far has resulted in a great deal of wasted effort – and money.

On March 8, 2012, teams of village volunteers in Camarines Sur province on the Filipino island of Luzon sunk over a million mangrove seedlings into coastal mud in just an hour of frenzied activity. The governor declared it a resounding success for his continuing efforts to green the province. At a hasty ceremony on dry land, an official adjudicator from Guinness World Records declared that nobody had ever planted so many trees in such a short time and handed the governor a certificate proclaiming the world record. Plenty of headlines followed.

There is now no sign of the mangroves that, after a decade of growth, should be close to maturity. An on-the-ground study published in 2020 by British mangrove restoration researcher Dominic Wodehouse, then of Bangor University in Wales, found that fewer than 2% of them had survived. The other 98% had died or were washed away.

In another high-profile case, in November 2019, the Turkish government claimed to have planted more trees on dry land than anyone else in a single hour — 300,000, in the central province of Çorum. It beat a record, also confirmed by Guinness inspectors, set four years before in the Himalayan state of Bhutan. The Çorum planting was part of a National Afforestation Day, when volunteers planted 11 million trees at 2,000 sites across Turkey. President Recep Tayyip Erdoğan was among those wielding a spade.

Two months later, the head of the country’s union of forestry workers reported that a survey by its members had found that as many as 90% of the plantings had died. The government denies this, but experts said its counter-claim that 95% of the trees had survived and continued to grow was improbably high. No independent audit has yet been carried out.

Another study, published last year by the nonprofit World Resources Institute (WRI) in Mexico, called into question the benefits from a billion-dollar government-funded environmental recovery program. Sembrando Vida pays farmers to plant trees across the country to help Mexico meet its climate targets under the Paris Agreement.

WRI found the program has no effective audit of outcomes, and that rates of forest loss were currently greater in states implementing the plan than in others. It concluded that the program “could have had a negative impact on forest cover and compliance with the country’s carbon mitigation goals.”

The government of Sri Lanka launched a mass mangrove planting program around its shores to help prevent a repeat of the disastrous loss of life there during the 2004 Indian Ocean tsunami.

The program has turned out to be an abysmal failure. “9 out of 23 project sites … showed no surviving plants,” according to a 2017 study by Sunanda Kodikara of the University of Ruhuna. “Only three sites showed a level of survival higher than 50%.”

In an investigation published last year into extensive government-organized tree planting over several decades in the northern Indian state of Himachal Pradesh, Eric Coleman of Florida State University and colleagues found little evidence that it had resulted in more tree cover, carbon uptake, or community benefits.

Tree planting in the Philippines under its National Greening Program has also been a widespread failure, according to a 2019 study by the government’s own Commission on Audit. Ministers imposed unachievable planting targets, it said, resulting in planting “without … survey, mapping and planning.” The actual increase in forest cover achieved was little more than a tenth of that planned.

The causes of failure vary but include:

Every year, “millions of dollars” are spent on reforesting landscapes, according to Lalisa Duguma of World Agroforestry, an international research agency in Nairobi, Kenya. Yet “there are few success stories.” Typically only a minority of seedlings survive, he says, because the wrong trees are planted in the wrong places, and many are left untended, in part because ownership and management of trees is not handed over to local communities.

Phantom forests are increasingly sabotaging efforts to rein in climate change. This happens when planters claim the presumed take-up of carbon by growing forests as carbon credits. If certified by reputable bodies, these credits can count toward governments meeting their national emissions targets or be sold to industrial polluters to offset their emissions.

But even the best-planned and best-audited planting projects can come undone, leaving behind non-existent forests and uncaptured carbon.

The California Air Resources Board (CARB) is a major certifier of carbon-offset forests across the American West. It approves the carbon credits generated by the forests, which are then sold to industrial polluters in California who want to offset their emissions in line with state regulations.

But climate change is leaving the western U.S. increasingly vulnerable to wildfires. To meet this challenge, CARB requires offset developers to hold back from sale a proportion of the credits, which they put into a central buffer fund as insurance against a variety of potential mishaps during the 100-year planned lifetime of the offsets. Up to 4% of credits insure against wildfires. That buffer fund picked up the tab, for instance, when 99% of the carbon in a forest offset project on Eddie Ranch in Northern California burned in a fire in 2018.

But the CARB certification system is running out of buffer carbon, according to an analysis published in August by ecologist Grayson Badgley at CarbonPlan, a nonprofit climate solutions database. He found that just 7 years into its supposed century-long insurance, 95% of the wildfire buffer has been consumed by just six fires across the West. Danny Cullenward, an environmental lawyer at American University in Washington, D.C. and co-author of the CarbonPlan analysis, calls this “a giant Ponzi scheme.”

Many forest ecologists say creating space to allow nature to do its thing is usually a better approach to restoring forests than planting. “Allowing nature to choose which species predominate … allows for local adaptation and higher functional diversity,” argues one advocate, Robin Chazdon of the University of Connecticut, in her book Second Growth. For mangroves, Wetlands International now recommends abandoning widespread planting and instead creating areas of slack water along coastlines, where mangroves can naturally reseed and grow.