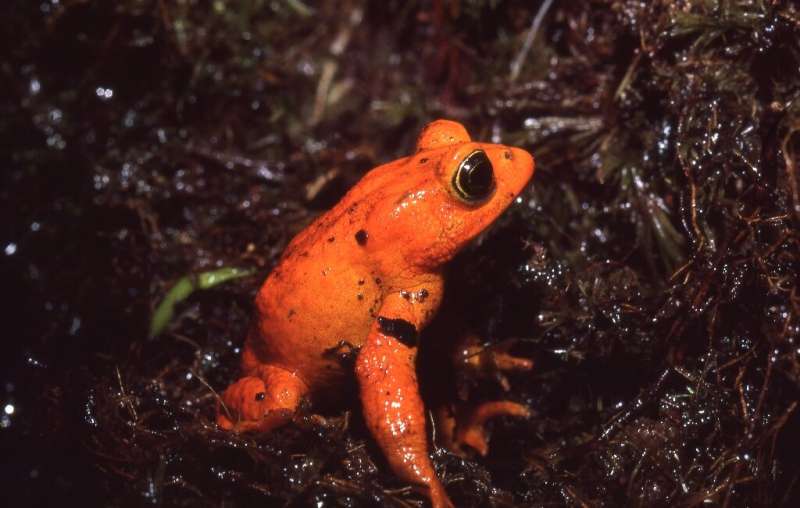 In this mysterious woodland the cloud drapes over mountain ridges and “the trees are dwarfed and wind-sculpted, gnarled and heavily laden with mosses,” said J Alan Pounds, an ecologist at the Monteverde Cloud Forest Preserve in Costa Rica.

“The soils are very dark and so golden toads would stand out like animal figurines. It was quite a spectacle.”

The golden toad was the first species where climate change has been identified as a key driver of extinction.

The die-offs occurred after unusually warm and dry periods.

Pounds and his colleagues linked the declines to chytridiomycosis infection, but concluded that disease was only “the bullet—climate change was pulling the trigger”.

The expansion of the chytrid fungus globally, along with local climate change “is implicated in the extinction of a wide range of tropical amphibians,” according to the IPCC.

For years, researchers have warned that the world is facing both a climate and a biodiversity crisis. Increasingly they say they are connected.

Even if warming is capped at the ambitious target of 1.5 degrees Celsius above pre-industrial levels, the UN’s Intergovernmental Panel on Climate Change says nearly one in 10 of all species face an extinction threat.

The fingerprints of global warming have since been seen in other disappearances.

The Bramble Cay melomys, a small rodent living on a low-lying island in the Torres Strait, was last seen in 2009.

The only mammal endemic to the Great Barrier Reef, its populations were battered by sea-level rise, increased storm surges and tropical cyclones—all made worse by climate change.

Vegetation that provided its food plummeted from 11 plant species in 1998 to just two in 2014. It was recently declared extinct.

Today, climate change is listed as a direct threat to 11,475 species assessed by the International Union for Conservation of Nature. Around 5,775 are at risk of extinction.

Beyond extreme weather, warming can also cause species to move, change behaviour or even skew to having more male or female offspring.

And that’s on top of other human threats like poaching, deforestation, overfishing and pollution.

In 2019, a report by UN biodiversity report experts said one million species could disappear in the coming decades, raising fears that the world is entering a sixth era of mass extinction.