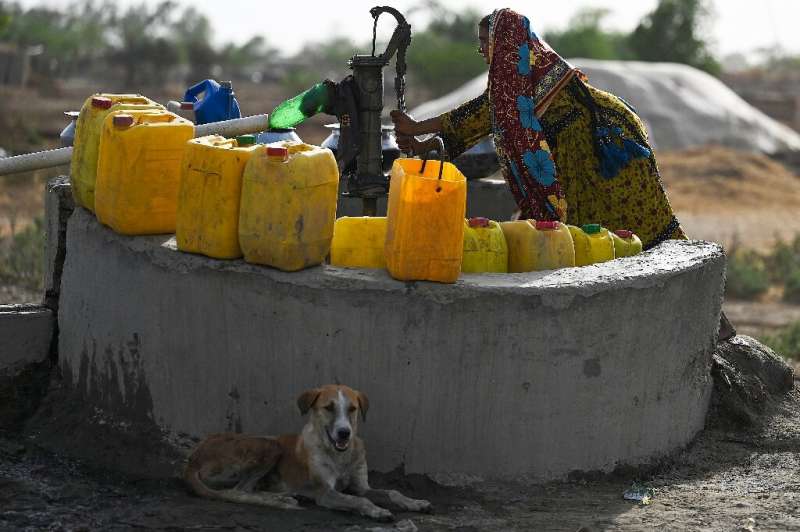 Jacobabad in Pakistan’s arid Sindh province is in the grip of the latest heatwave to hit South Asia—peaking at 51˚C (124˚F).

Canals in the city—a vital source of irrigation for nearby farms—have run dry, with a smattering of stagnant water barely visible around strewn rubbish.

Experts say the searing weather is in line with projections for global warming.

The city is on the “front line of climate change”, said its deputy commissioner Abdul Hafeez Siyal. “The overall quality of life here is suffering.”

Most of the one million people in Jacobabad and surrounding villages live in acute poverty, with water shortages and power cuts compromising their ability to beat the heat.

Heatstroke—when the body becomes so overheated it can no longer cool itself—can cause symptoms from light-headedness and nausea to organ swelling, unconsciousness, and even death.

Life in Jacobabad is dominated by attempts to cope with the heat.

“It’s like fire burning all around. What we need the most is electricity and water,” said blacksmith Shafi Mohammad.

Power shortages mean only 6 hours of electricity a day in rural areas and 12 in the city.

Access to drinking water is unreliable and unaffordable due to scarcity across Pakistan and major infrastructure problems.

In a farming village on the outskirts of the city, women wake up at 3am to pump drinking water all day from a well—but it is never enough.

“We prefer our cattle to have clean drinking water first, because our livelihood depends on them,” said Abdul Sattar, who raises buffaloes for milk and sale at market.

There is no compromise on this, even when children suffer skin conditions and diarrhoea.

“It is a difficult choice but if the cattle die, how would the children eat?” he said.

Many people choose to leave Jacobabad in the hottest months, leaving some villages half empty.

Sharaf Khatoon shares a makeshift camp in the city with up to 100 people surviving on a few meagre rupees that male family members earn through menial labour.

But this year they will leave late, struggling to save the money for the journey.

“We have headaches, unusual heartbeats, skin problems, but there is nothing we can do about it,” said Khatoon.

“It’s exacerbated in places like Jacobabad by the degradation of infrastructure and access to water and electricity which compromises people’s capacity to cope.”

Along a dried up canal filled with rubbish, hundreds of boys and a handful of girls in Jacobabad pour into a school for their end-of-year exams.

They gather around a hand pump to gulp down water, exhausted even before the day begins.

A few classrooms have fans, though most do not. When the electricity is cut just an hour into the school day, everyone swelters in semi-darkness.

Some rooms become so unbearable that children are moved into corridors, with youngsters frequently fainting.

“We suffocate in the heat. We sweat profusely and our clothes get drenched,” said 15-year-old Ali Raza.

The boys told AFP they suffered from headaches and frequent diarrhoea but refused to skip lessons.

Khalhoro said his students are determined to break out of poverty and find jobs where they can escape the heat.

“They are prepared as though they are on a battlefield, with the motivation that they must achieve something.”