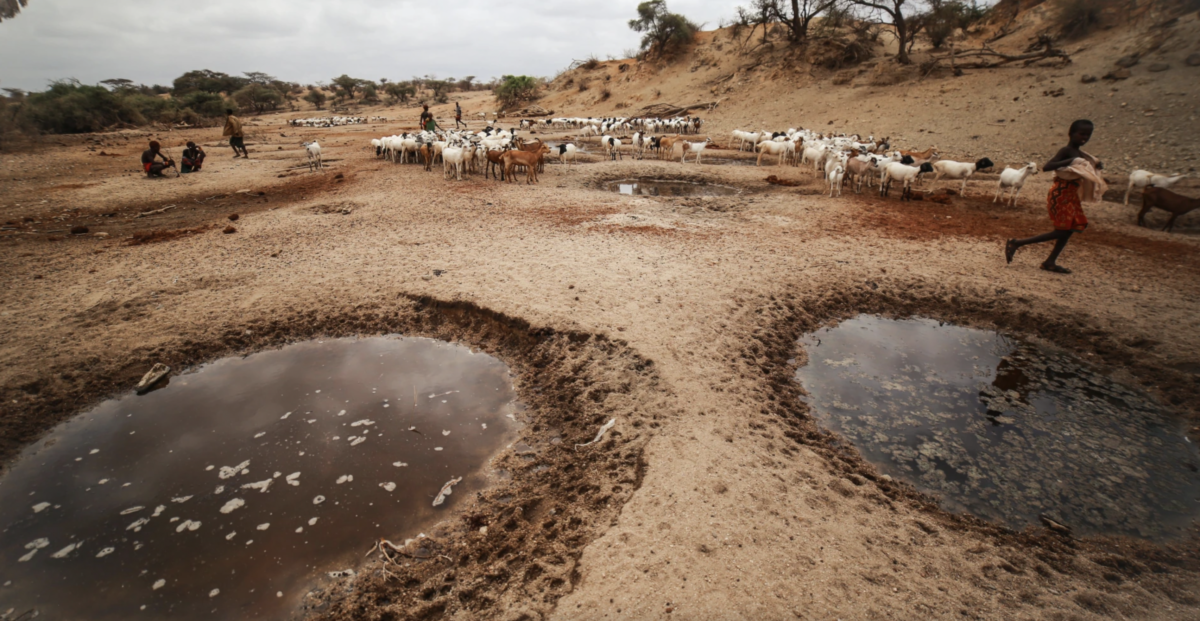 Kenya’s remote Marsabit County, in the far north near the border with Ethiopia, is the land of pastoralists.

The region has been dubbed the “Cradle of Mankind” – Kenya has more fossil human species remains than anywhere else in Africa.

But as East Africa faces a debilitating succession of droughts, the worst in 40 years, the region’s resilient communities are being pushed to their limits.

Benjamin Galwaha was born and raised in Laisamis – a modest town, 3,000 strong – in southern Marsabit. The 33-year-old runs a small shop in addition to owning a few dozen cattle and sheep.

As his three young sons watch American cartoons inside one of the traditional huts he has built for his family, he thinks back to just a couple of decades ago when his hometown seemed like a different place: There were wild animals abound, abundant wild fruits for foraging, plenty of space for everyone’s animals; things were peaceful.

Back then, the town had a mere fraction of its current population, and the landscape was thickly covered with dryland forest.

Now, the sandy landscape appears barren, punctuated by thorny brush and the occasional green shrubs that goats nibble at hopefully.

“Everyone had plenty of animals then,” Galwaha remembers, leaning his slender frame over his motorbike. “We ate meat all the time. But life has gotten much tougher now.”

Marsabit’s arid landscape is a combination of desert, seasonal rivers, and extinct volcanic craters – proliferated by megafauna, such as giraffes and elephants.

The traditionally nomadic or semi-nomadic Rendille, Samburu, Borana and Turkana people native to the region are proud of their cultural identity as livestock herders, dating back to time immemorial.

Today, as many as 90% of Marsabit inhabitants do not live in permanent homes and instead move with their animals based on seasonal forage and available water sources.

The county is known for limited and erratic rainfall, receiving an average of 700mm (27 inches) of rainfall a year during the past 30 years, says Patricia Nying’uro, a climate scientist at the Kenya Meteorological Department – for comparison, Tanzania, Kenya’s southern neighbour, receives an average of 1,017mm (40 inches).

“There is a steady annual decline in rainfall amounts,” Nying’uro tells Al Jazeera. “The area is indeed getting drier.”

Galwaha and his neighbours in Laisamis say that their animals have been dying off and becoming increasingly ill since the rains have failed.

“The few times it has rained this year, it lasts only a few minutes. By the end of the day, everything is dry again and you would have never guessed that there was ever rain,” he says.

This is tough for both humans and animals, who must walk increasingly great distances to reach remaining water sources, while the endemic vegetation does not receive rainfall to regenerate.

A report by the Kenya Food Security Steering Group (KFSSG) found that the continuing decline in rangeland resources and lacklustre harvest from poor, short rains have contributed to livestock disease and mortality and general household food insecurity.

In February 2022, there were an estimated 3.1 million food-insecure people in northern Kenya, a 40% increase from August 2021. More people have been going hungry since the lack of rains is directly linked to crop failures; food prices have been surging.

Dramatic climate shifts also translate to changes in the value systems of their communities, Galwaha says.

It is to be expected for a culture heavily contingent on weather and environmental factors.

“We’ve had to switch back to the wage economy, from a self-sustaining lifestyle that we’re proud of where cattle signal wealth and determine integral social relations,” he says.

The drought has changed the way that people eat and how they prioritise daily goals, he explains.

Herders have been forced to sell off their animals at prices far below market value since they have been dying from the trying conditions; milk has largely dried up.

Instead of harbouring dreams to buy prize cattle, people are now just trying to survive.

What is happening in northern Kenya should not be mistaken for a singular drought, experts say.

This is the fourth consecutive failed rainy season since September 2020, according to Nicolas Bellet, a climate information expert at the Intergovernmental Authority on Development (IGAD) Climate Prediction and Applications Center.

“It’s important to note that these communities are highly resilient. They are fine in the face of one or two droughts, maybe even three. But four is really pushing it,” he says.

“This is devastating in the sense that it takes these communities on average five years to recover from one drought – the time it takes to raise a calf to maturity.”

“When droughts are back-to-back like this, it’s decimating their livelihoods, all of their wealth. These people are really being pushed to their limits.”

The isolation caused by COVID-19 lockdowns exacerbated the marginalisation that under-resourced places like Marsabit already faced, while locusts decimated crops and further chipped away at the food security of impoverished communities in Kenya’s north.

Most pastoralists rely on their animals as their sole income stream. When animals suffer, so do humans.

The dwindling supply of viable forage is pushing livestock herders to desperation, some having to walk as far as 35km (21 miles) a day to the last remaining watering holes – naturally occurring high water tables – just to keep their animals alive. They will continue doing so until the drought is over.