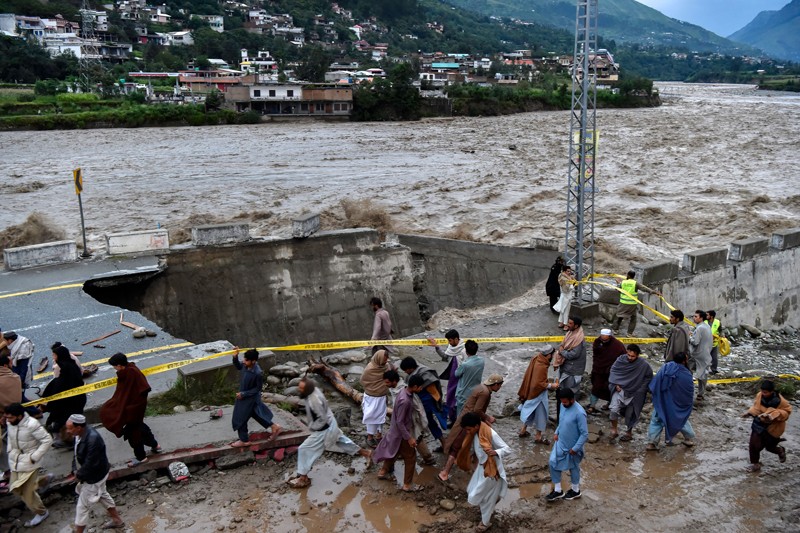 Pakistan is experiencing its worst floods this century. At least one-third of the country is under water. Scientists say several factors have contributed to the extreme event, which has displaced some 33 million people and killed more than 1,200.

Researchers say the catastrophe probably started with phenomenal heatwaves. In April and May, temperatures reached above 40°C (104˚F) for prolonged periods in many places. On one sweltering day in May, the city of Jacobabad topped 51°C (124˚F). “These were not normal heatwaves — they were the worst in the world. We had the hottest place on Earth in Pakistan,” says Malik Amin Aslam, the country’s former minister for climate change.

Warmer air can hold more moisture. So meteorologists warned earlier this year that the extreme temperatures would probably result in “above normal” levels of rain during the country’s monsoon season, from July to September, says Zia Hashmi, a water-resources engineer at the Global Change Impact Studies Centre in Islamabad.

The intense heat also melted glaciers in the northern mountainous regions, increasing the amount of water flowing into tributaries that eventually make their way into the Indus river, says Athar Hussain, a climate scientist at COMSATS University Islamabad. The Indus is Pakistan’s largest river, and runs the length of the country from north to south, feeding towns, cities and large swathes of agricultural land along the way.

The heatwaves also coincided with another extraordinary event — a depression, or a system of intense low air pressure, in the Arabian Sea, which brought heavy rain to Pakistan’s coastal provinces as early as June.

These unusual features were then exacerbated by the early arrival of the monsoon on 30 June, which “was wetter generally over a larger region for a very prolonged period of time”, says Andrew King, a climate scientist at the University of Melbourne, Australia.

The effect is that Pakistan has received almost twice its average annual rainfall. The southern provinces of Sindh and Baluchistan have received more than five times that average. “The flooding is all over,” says Hashmi.

Once on land, much of that water has nowhere to go. More than 1.2 million houses, 5,000 kilometres of road and 240 bridges have been destroyed. In Sindh, an elongated lake has formed, tens of kilometres wide, and more water will continue to pour into it, says Aslam. “The worst is not over.”