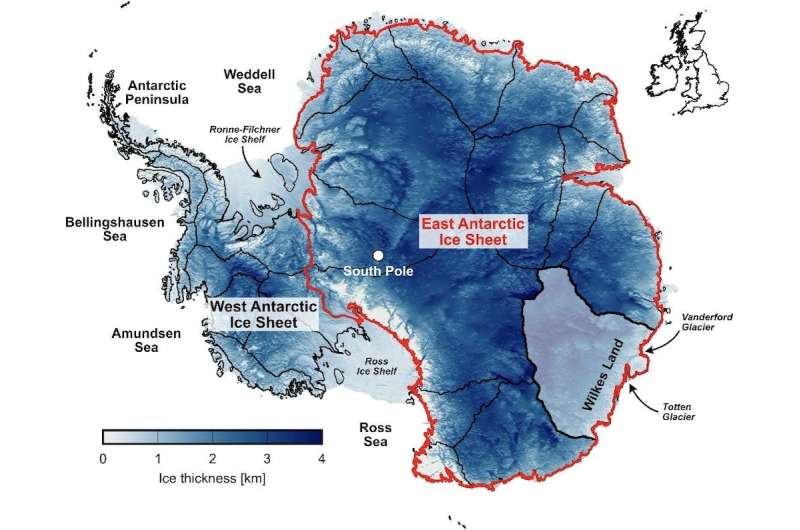 The eastern two thirds of Antarctica is covered by an ice sheet so large that if it melted the sea would rise by 52 meters (170 feet).

An estimated 1 billion people live within 10 meters of sea level, including 230 million within 1 meter.

Scientists measure changes in the volume of these ice sheets by estimating the mass input, mostly via snowfall, and the mass output, mostly melting snow and ice along with icebergs that break off and float away. The difference between input and output is known as the ice sheet’s “mass balance,” which is highly sensitive to climate change.

Over the past two decades or so, observations suggest that the East Antarctic Ice Sheet may be far more sensitive to climate warming than previously thought. Major outlet glaciers like the Totten and Vanderford are thinning and retreating. And there are clear signals of mass loss in Wilkes Land, the ice sheet’s “weak underbelly,” so-called because it rests on “land” that lies well below sea-level and so is particularly unstable.

There is also evidence that parts of East Antarctica retreated quite dramatically during warm periods in the past, when carbon dioxide concentrations and atmospheric temperatures were only slightly higher than present.

It is likely that East Antarctica contributed several meters to global sea level during the mid-Pliocene warm period, around 3 million years ago, with ice loss concentrated in Wilkes Land. Recent work has also suggested that ice in Wilkes Land retreated 700 km inland from its present position around 400,000 years ago, when global temperatures were only 1 or 2℃ higher than present.

Research focused on an offshore a region known as the Aurora Subglacial Basin in the Indian Ocean. This area of frozen sea ice forms part of the East Antarctic ice sheet.

How this basin will respond to climate change is one of the largest uncertainties in projections of sea-level rise this century. If the basin melted fully, global sea levels would rise by 5.1 meters (16 feet 8 inches). Much of the basin is below sea level, making it particularly sensitive to ocean melting. That’s because deep seawater requires lower temperatures to freeze than shallower seawater.

Research found oceanographic warming of Aurora Subglacial Basin at a rate of up to 2℃ to 3℃ since the earlier half of the 20th century. This equates to 0.1℃ to 0.4℃ per decade. The warming trend has tripled since the 1990s, reaching a rate of 0.3℃ to 0.9℃ each decade.

This has been caused by a belt of strong westerly winds over the Southern Ocean that has been moving south towards Antarctica during years when the Southern Annular Mode, a climate driver, is in a positive phase.

The phenomenon has been partly attributed to increasing greenhouse gases in the atmosphere. As a result, westerly winds are moving closer to Antarctica in summer, bringing warm water with them.

Furthermore, East Antarctic marine ecosystems are likely to be highly vulnerable to warming waters. Antarctic krill, for example, breed by sinking eggs to deep ocean depths. Warming of deeper waters may affect the development of eggs and larvae. This in turn would affect krill populations and dependent predators such as penguins, seals and whales.