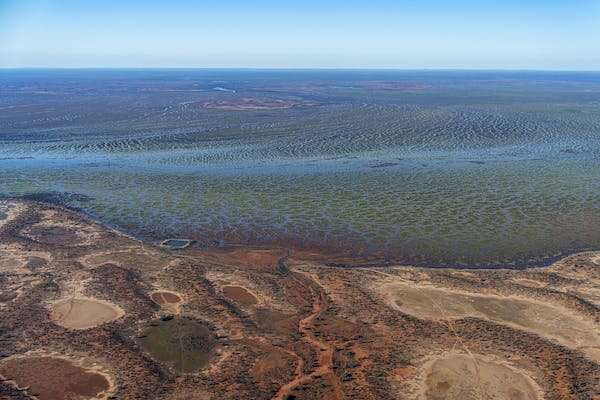 The heart-shaped Lake Eyre Basin covers about one-sixth of Australia. It contains one of the few remaining pristine river systems in the world.

The biggest rivers feeding the basin—the Diamantina, Georgina and Cooper—originate in western Queensland and flow to South Australia where they pour into Lake Eyre.

New research shows oil and gas activity is extending its tentacles into these fragile environments. Its wells, pads, roads and dams threaten to change water flows and pollute this magnificent ecosystem.

831 oil and gas production and exploration wells exist on the floodplains of the Lake Eyre Basin—almost 99% of them on the Cooper Creek floodplains.

The CSIRO recently examined likely scenarios of 1,000 to 1,500 additional unconventional gas wells in the Cooper Basin in the next 50 years. It predicted these wells would built be on “pads” (areas occupied by mining equipment) about 4 kilometers (2.5 miles) apart. They would typically access gas using horizontal drilling and hydraulic fracturing, or fracking.

Fracking is the process of extracting “unconventional gas.” It involves using water and chemicals to fracture deep rocks to extract the gas. This polluted water, known to be toxic to fish, is brought back to the surface and stored in dams.

Two locations research focused on were in South Australia at the protected, Ramsar-listed Coongie Lakes site, which was recognized as internationally significant in 1987. The other site was in Queensland’s channel country, also on the Cooper floodplain.

The CSIRO says risks associated with oil and gas development in the Cooper Basin include:

Australia’s federal environment law—the Environment Protection and Biodiversity Conservation Act—is supposed to protect nationally important areas such as Ramsar wetlands. Yet research identified that just 8 developments in the basin were referred to the Commonwealth government for approval and with only 1 deemed significant enough for assessment. This legislation does not deal adequately with the cumulative impacts of development.

In response to this article, chief executive of the Australian Petroleum Production & Exploration Association, Samantha McCulloch, said in a statement: “The oil and gas industry takes its responsibilities to the environment and to local communities seriously and it is one of the most heavily regulated sectors in Australia. The industry has been operating in Queensland for more than a decade and the gas produced in Queensland plays an important role in Australia’s energy security.”