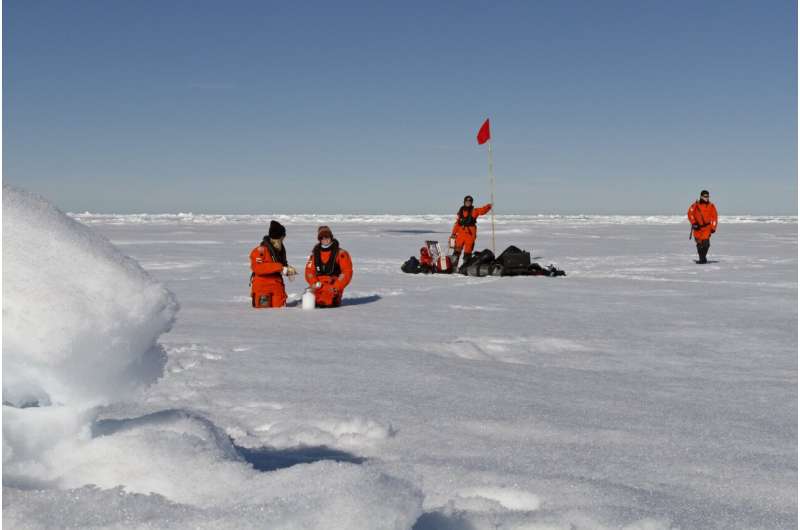 Large quantities of plastic—transported by rivers, the air and shipping–can now be found in the Arctic Ocean. High concentrations of microplastic can be found in the water, on the seafloor, remote beaches, in rivers, and even in ice and snow. The plastic is not only a burden for ecosystems; it could also worsen climate change.

Today, between 19 and 23 million metric tons of plastic litter per year end up in the waters of the world—that’s two truckloads per minute. Since plastic is also very stable, it accumulates in the oceans, where it gradually breaks down into ever smaller pieces—from macro- to micro- and nanoplastic and can even enter the human bloodstream. And the flood of debris is bound to get worse: global plastic production is expected to double by 2045.

Today, virtually all marine organisms investigated—from plankton to sperm whales—come into contact with plastic debris and microplastic. And this applies to all areas of the world’s oceans—from tropical beaches to the deepest oceanic trenches.

Although the Arctic is sparsely populated, in virtually all habitats—from beaches and the water column, to the seafloor—it shows a similar level of plastic pollution as densely populated regions around the globe.

As climate change progresses, the Arctic is warming three times faster than the rest of the world. Consequently, the plastic flood is hitting ecosystems that are already seriously strained.

“The Arctic is still assumed to be a largely untouched wilderness,” says Dr. Melanie Bergmann. “In our review, which we jointly conducted with colleagues from Norway, Canada and the Netherlands, we show that this perception no longer reflects the reality. Our northernmost ecosystems are already particularly hard hit by climate change. This is now exacerbated by plastic pollution. And our own research has shown that the pollution continues to worsen.”

“Unfortunately, there are very few studies on the effects of the plastic on marine organisms in the Arctic,” Bergmann explains. “But there is evidence that the consequences there are similar to those in better-studied regions: in the Arctic, too, many animals—polar bears, seals, reindeer and seabirds—become entangled in plastic and die. In the Arctic, too, unintentionally ingested microplastic likely leads to reduced growth and reproduction, to physiological stress and inflammations in the tissues of marine animals, and even runs in the blood of humans.”