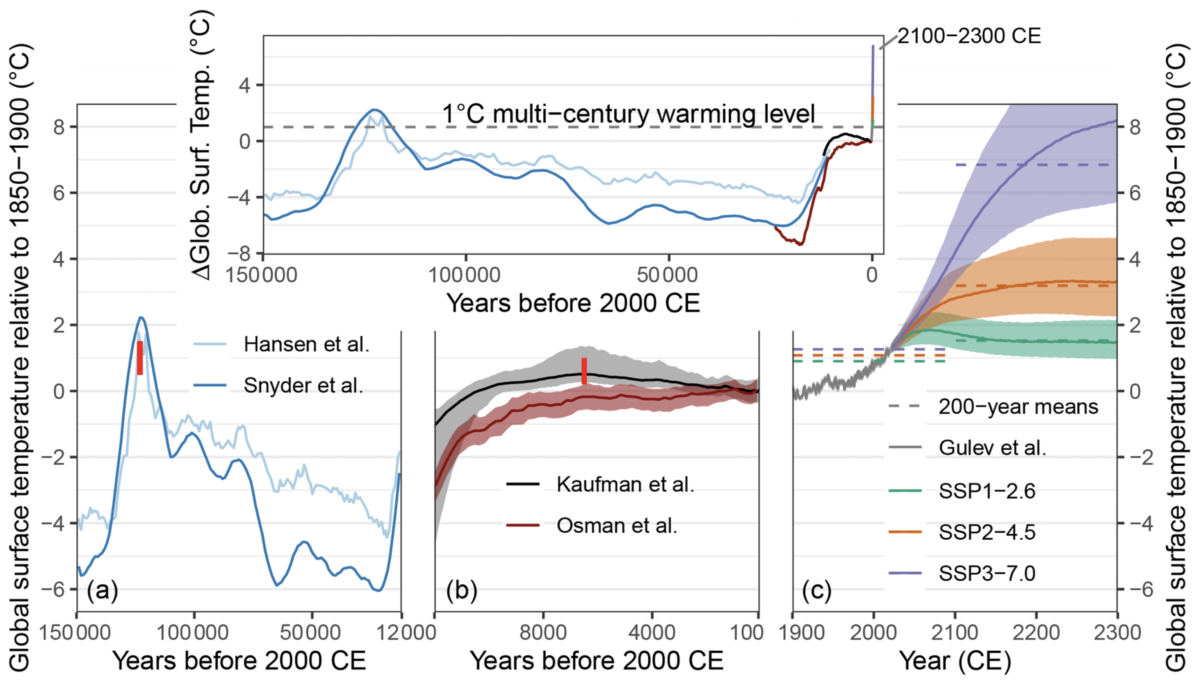 In 2013, the Intergovernmental Panel on Climate Change (IPCC) report (Assessment Report 5; AR5) concluded that Northern Hemisphere temperatures had reached levels unprecedented in at least 1,400 years. The 2021 report (AR6) now sees global mean temperatures rising to levels unprecedented in over 100,000 years. This Technical Note briefly explains the reasons behind this major change. Namely, the new assessment reflects additional global warming that occurred between the two reports and improved paleotemperature reconstructions that extend further back in time. In addition to past and recent warming, the conclusion also considers multi-century future warming, which thereby enables a direct comparison with paleotemperature reconstructions on multi-century time scales.

The upcoming global warming will be driven by continued emissions of greenhouse gases and will be exacerbated regionally as slow-moving components of the climate system continue to react to the greenhouse gases already in the atmosphere for centuries to come.

This multi-century, approximately 1.2 to 4.1˚C level of global warming can be reasonably compared with global temperature over a similar time horizon: that is, the warmest multi-century interval of the Holocene (diagram above). The median reconstruction shows that the warmest 200-year-long interval prior to industrialization took place around 6500 years ago, when global temperature is estimated to have been 0.7˚C [0.3, 1.8˚C] warmer than the 19th century.

Lower temperatures simulated by models are consistent with the conclusion that a global warming level of at least 1˚C is unprecedented during the pre-industrial Holocene.

Global warming has reached 1˚C relative to the late 1800s and, in the absence of a strong reduction in greenhouse gas emissions, is on track to remain at least as warm and possibly much warmer for multiple centuries. The duration of this ongoing and upcoming global warming is on par with that of the resolution of Holocene paleotemperature reconstructions. Human-caused global warming is now exceeding the warmest multi-century period of the Holocene and thereby the envelope of temperatures under which agriculturally based society has flourished. Without rapid and sustained reductions in greenhouse gas emissions, the average temperature of coming centuries will exceed 1.5˚C above pre-industrial temperature and will therefore be warmer than the peak of the last interglacial around 125,000 years ago.