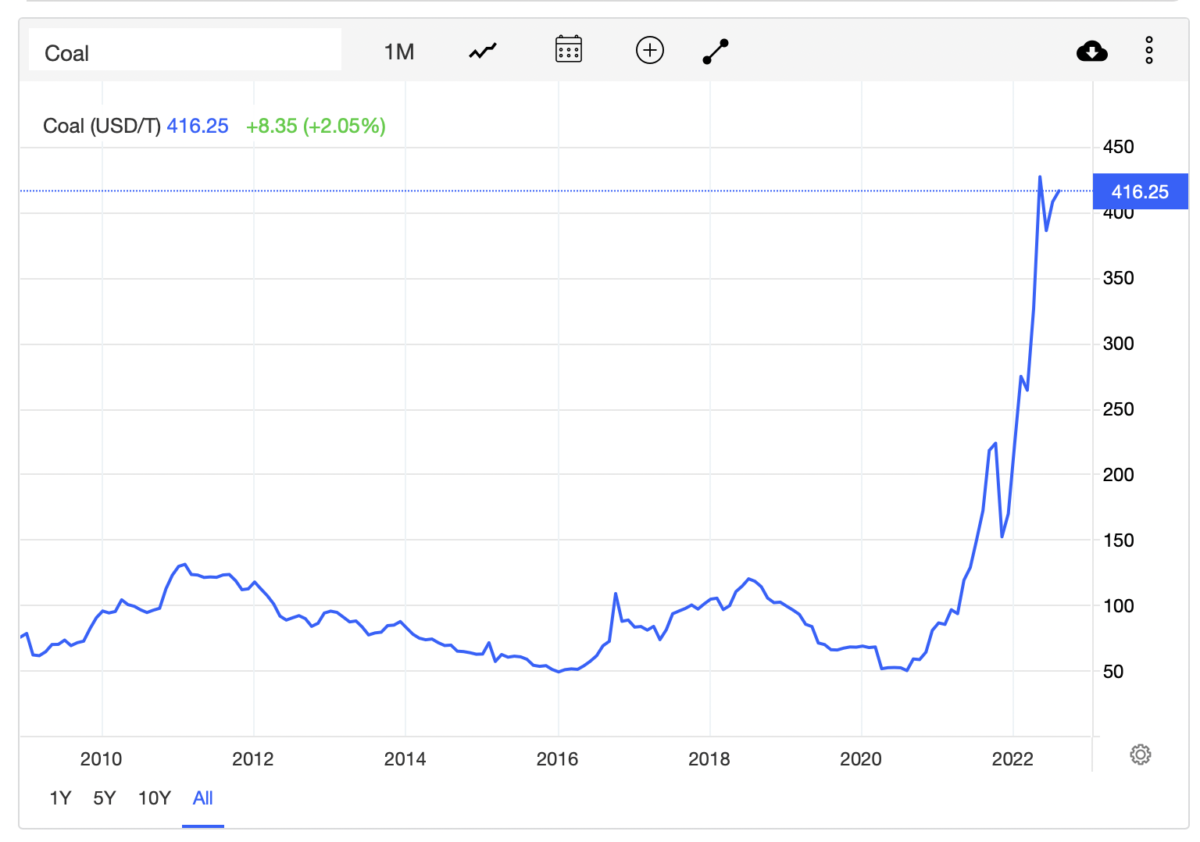 The spot price of Australian thermal coal is higher than that of coking coal, an unprecedented situation that highlights just how the global market for the polluting fuel has been upended by Russia’s invasion of Ukraine.

But while moves in the various spot prices tend to gather media headlines, it’s worth noting that they cover only a tiny volume of the whole seaborne market for thermal coal, a fuel for power stations.

What are far more significant are annual contract prices agreed between Australian miners and Japanese utilities in an opaque process that sets the cost of thermal coal for much of Asia.

In effect, the spot price is the price of last resort, insofar as it is paid by only those buyers desperate to secure supplies at any cost.

The bulk of exports of thermal coal from Australia, the fuel’s second-biggest shipper, behind Indonesia, are priced against annual contracts agreed between miners and Japanese utilities, which typically run from the start of the Japanese fiscal year on April 1.

Australia exports around 20% of the world’s thermal coal supplies, with Russia accounting for 18%. Indonesia is the market leader at 42%.

The annual contract for Australian thermal coal that is most watched is the one between miner Glencore and Japan’s Tohoku Electric Power.

The two companies don’t disclose details of the talks or the outcome, but the settlement price generally leaks out and is followed by much of the market for other deals.

This year it’s believed that Glencore initially wanted as much as $400 a tonne, while Tohoku was aiming for closer to $150, and negotiations so far have narrowed the gap but hardly closed it.

Assuming an agreement is eventually struck, the new price will certainly be a substantial hike from that of 2021-22, meaning power prices are likely to rise in Japan – and also in South Korea and Taiwan, which also use Australian thermal coal.

However, it’s also likely that the price agreed will be some way short of current sky-high spot prices.

Spot Australian Newcastle coal is also trading at about eight times the price of mid-2020, when prices had slumped amid the economic fallout from the initial outbreaks of the COVID-19 pandemic.

The price has reached its current elevated levels on the back of strong demand from Europe, which is turning to seaborne coal from South Africa and even as far away as Australia as it halts imports from Russia.

Power shortages in India and Japan, the world’s second- and third-biggest coal importers, respectively, have also boosted demand and prices.

“Prices are very elevated because the world’s said we’re not going to buy Russian commodities, and they’re a big thermal coal exporter,” said Jon Mills, an equity analyst at Morningstar.

“Over the longer term I think thermal coal is still going to be around for decades for the simple reason that in Southeast Asia they have all these high-energy, low-emission power plants that are very, very young,” Mr Mills said.

“Energy demand will increase dramatically as their standard of living increases, so I think thermal coal will be part of their energy system for a few decades at least.”