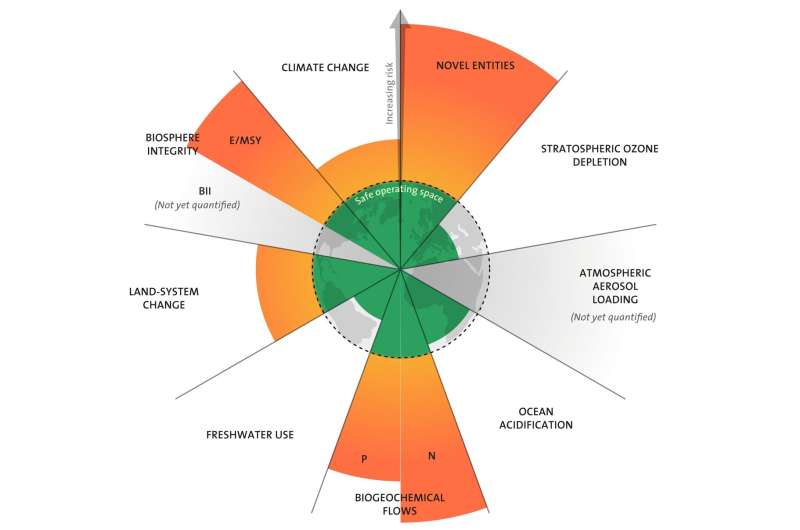 In 2009, an international team of researchers identified nine planetary boundaries that demarcate the remarkably stable state Earth has remained within for 10,000 years—since the dawn of civilization. These boundaries include greenhouse gas emissions, the ozone layer, forests, freshwater and biodiversity. The researchers quantified the boundaries that influence Earth’s stability, and concluded in 2015 that four boundaries have been breached.

For the first time, an international team of researchers has assessed the impact on the stability of the Earth system of the cocktail of synthetic chemicals and other “novel entities” flooding the environment. The 14 scientists conclude in the scientific journal Environmental Science and Technology that humanity has exceeded a planetary boundary related to environmental pollutants including plastics.

There are an estimated 350,000 different types of manufactured chemicals on the global market. These include plastics, pesticides, industrial chemicals, chemicals in consumer products, antibiotics and other pharmaceuticals. These are all wholly novel entities, created by human activities with largely unknown effects on the Earth system. Significant volumes of these novel entities enter the environment each year.

“There has been a 50-fold increase in the production of chemicals since 1950. This is projected to triple again by 2050,” says co-author Patricia Villarubia-Gómez from the Stockholm Resilience Centre, Stockholm University. Plastic production alone increased 79% between 2000 and 2015, the team reports.

“The pace that societies are producing and releasing new chemicals and other novel entities into the environment is not consistent with staying within a safe operating space for humanity,” says Villarubia Gómez.

“The rate at which these pollutants are appearing in the environment far exceeds the capacity of governments to assess global and regional risks, let alone control any potential problems,” says co-author Bethanie Carney Almroth from the University of Gothenburg.