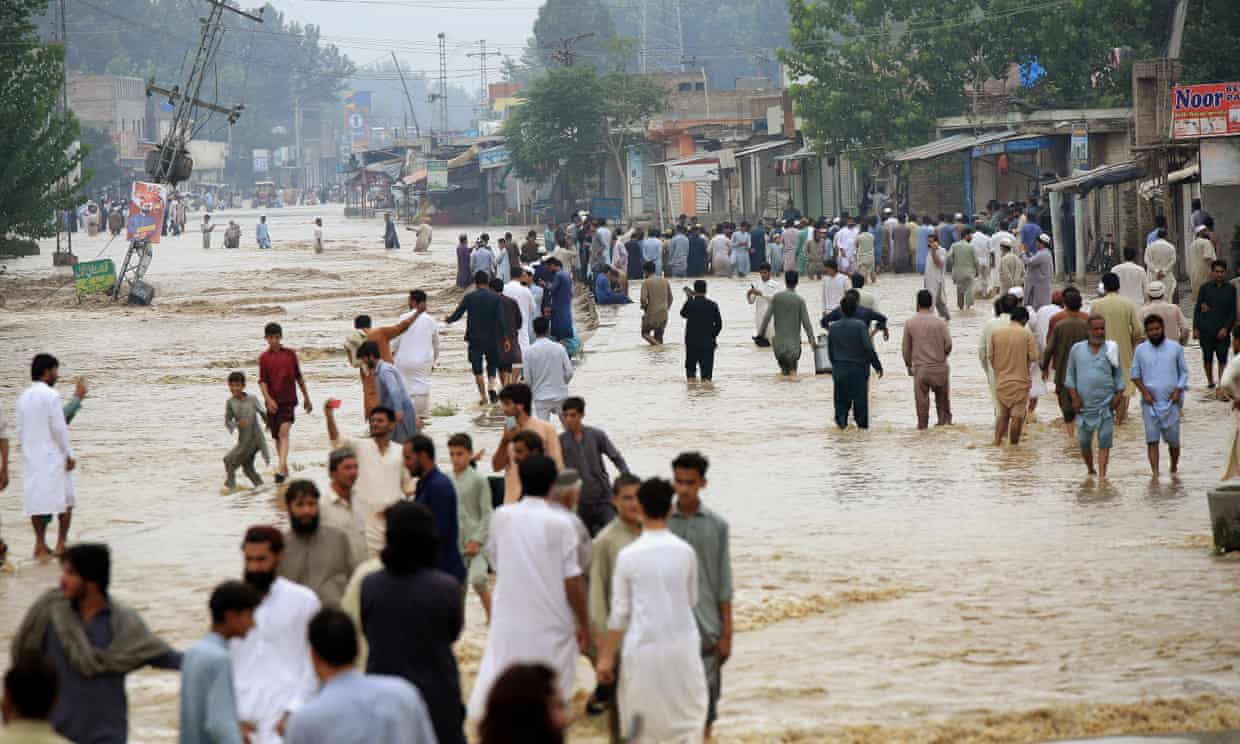 Flash floods, which have intensified in recent days, have swept away villages, roads, bridges, people, livestock and crops across all four provinces. Pakistan has appealed for international help as soldiers and rescue workers have evacuated stranded people to relief camps and provided food to thousands of displaced people.

The country’s National Disaster Management Authority said on Sunday the death toll from the monsoon rains had reached 1,033, with 119 killed in the previous 24 hours. It said this year’s floods were comparable with those of 2010 – the worst on record – when more than 2,000 people died and nearly a fifth of the country was under water.

The heavy downpour started in June and an abnormal monsoon has affected more than 33 million people – one in seven Pakistanis. Nearly 300,000 homes have been destroyed, numerous roads rendered impassable, and electricity outages have been widespread. Local media reported that at least 83,000 livestock had died in the last 24 hours.

Pakistan’s prime minister, Shehbaz Sharif, pleaded for help in a visit to badly hit Balochistan province. “I have never seen such flood in my personal and professional life. All four corners of Pakistan are under water. I request people to come ahead and help.”

The foreign minister, Bilawal Bhutto Zardari told Reuters: “I haven’t seen destruction of this scale. I find it very difficult to put into words … It is overwhelming,” adding that many crops that provided much of the population’s livelihoods had been wiped out. “Obviously, this will have an effect on the overall economic situation.”

Sherry Rehman, a senator and Pakistan’s climate change minister, said Pakistan was experiencing a “serious climate catastrophe, one of the hardest in the decade”.

“In the 2010 flood, one-fifth of Pakistan was under water. This is worse,” she said.

“What we see now is an ocean of water submerging entire districts of Pakistan by an unprecedented monsoon cycle that just does not stop, nor does it allow space for a rescue and recovery respite.”

“Pakistan has never seen unrelenting torrential rains like this. This is very far from a normal monsoon. It is a climate dystopia at our doorstep,” said Rehman.

The foreign minister, Bilawal Bhutto Zardari, told Reuters “I haven’t seen destruction of this scale. I find it very difficult to put into words … It is overwhelming,” adding that many crops that provided much of the population’s livelihoods had been wiped out. “Obviously, this will have an effect on the overall economic situation.”

Senator Mustafa Nawaz Khokhar said that Pakistan has the highest number of glaciers outside the polar region and this year, alongside a super-monsoon, the country has witnessed unprecedented glacier melting in the north due to global heating.

“It is highly unfair that a country which contributes less than 1% in global emissions is at the receiving end of the climate catastrophe.” he said.

Officials warned that torrents of water were expected to reach Sindh province in the next few days, adding to the misery of millions already affected by the floods, as a fresh deluge from the swollen rivers in the north worked its way downstream.