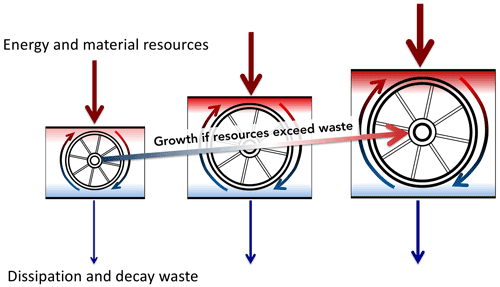 Here we present a contrasting argument: in each of the 50 years following 1970 for which reliable data are available, 1 exajoule of world energy was required to sustain each 5.5 trillion-year 2019 US dollars of a global wealth quantity, defined as the cumulative inflation-adjusted economic production summed over all history.

Considering that the scaling has held over half a century, a period that covers two-thirds of the historical growth in world energy demands, the implication is that inertia plays a far more dominant role in guiding societal trajectories than has generally been permitted in macroeconomics models or by policies that prescribe rapid climate mitigation strategies. If so, environmental impacts will remain strongly tethered to even quite distant past economic production – an unchangeable quantity.

As for the current economy, it will not in fact decouple from its resource needs. Instead, simply maintaining existing levels of world inflation-adjusted economic production will require sustaining growth of energy consumption at current rates.

Simply to stabilize carbon emissions, much less reduce them, any newly added energy production would need to be carbon-emission-free. Based on recent consumption growth rates, this works out to about 1 GW of non-carbon energy per day.