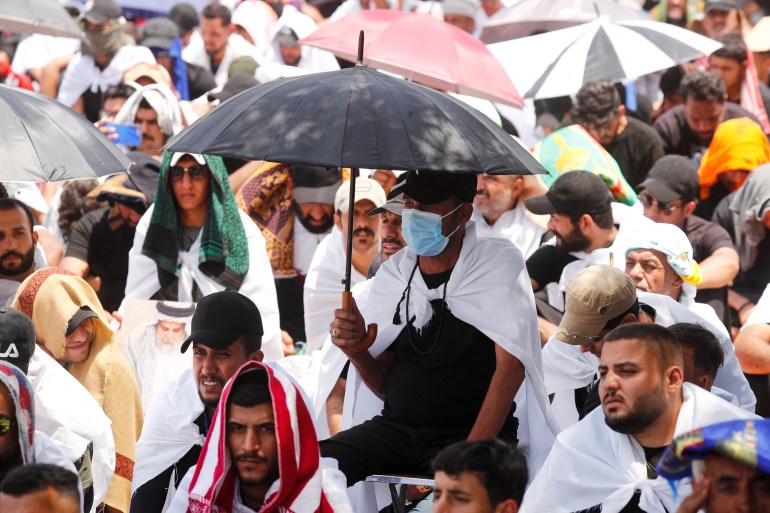 Temperatures have soared up to nearly 50˚C (122˚F) in Baghdad almost daily, and in the southern city of Basra, temperatures have come close to 53˚C (127˚F) – dangerously high in a country that has a chronic lack of basic infrastructure and services, and is also embroiled in a political crisis.

“It was so hot,” Haafez Alobaidi told Al Jazeera after the prayer called by influential Shia leader Muqtada al-Sadr.

“When the air was still, I felt like I was being roasted in an oven,” Alobaidi said.

“When there was breeze, it felt like a hairdryer was blowing in my face … full force,” he said.

“You thought living in Iraq would make you get used to this kind of weather, but no, no human beings should live in this weather.”

Since last year’s parliamentary elections, Iraq has endured more than 300 days without a government.

Iraq, an oil-rich country, has been exporting record amounts of oil and creating increasing revenue for the country due to the Russian invasion of Ukraine and global oil turbulence.

However, with the constraints on budget allocations due to the political stalemate, the government cannot tap into those growing wealth reserves accumulated over recent months as ministries across the government are battling with budgetary shortfalls.

Iraq’s Ministry of Electricity recently announced a state of emergency as the country continues to struggle with peak summer power demands and a less-than-adequate power supply.

The ministry announced on July 30 that it had achieved an unprecedented level of supply with power production reaching 23GW, which is still far behind the amount of power required for people to cope through the harsh summer. According to the ministry, electricity demand in the summer of 2022 will hit a record high of 34GW.

There are several causes of the power shortages, said Yaser al-Maleki, an energy economist and Gulf analyst at the Middle East Economic Survey.

“[There are] old power plants that face mechanic difficulties, or plants that are supposed to run on gas but are now running on liquid oil,” al-Maleki told Al Jazeera.

“But at the same time, the ministry simply isn’t prepared for the summer demands because they don’t have a budget.”

“What are they going to do for summer 2023 when demand is going to go higher – are we going through another couple of hundred days without a government?” he asked.

Yaser Zalzaly, along with his wife and two children, sat in Abu Nuwas Park on the banks of the Tigris river in central Baghdad, after the midday heat had started to subside.

Watching his children play in the water, Zalzaly told how the electricity supply at his house had dwindled to only four hours a day.

“It’s simply impossible to do anything in the house,” he said while using a magazine as a fan to generate some breeze.

“We come here every evening just to leave the heat trapped in our house.”