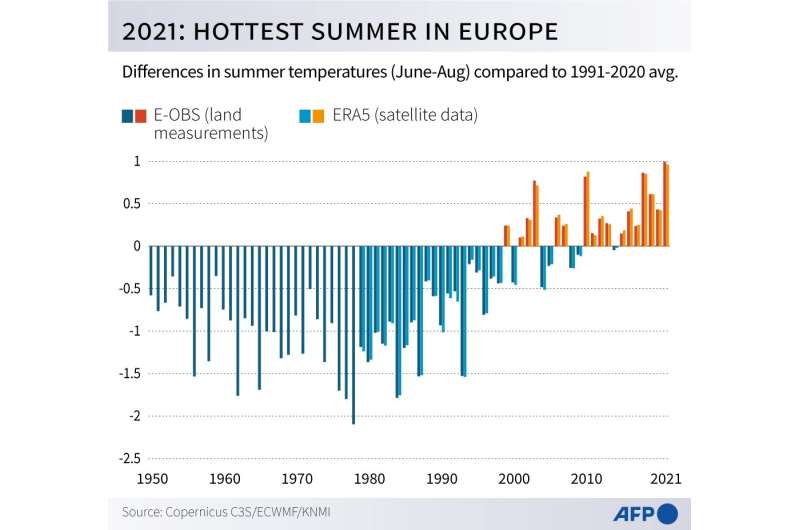 In just more than two decades, the continent has experienced its five hottest summers since 1500.

In Spain, temperatures reached 47˚C in parts of the south.

The summer of 2019 brought two heatwaves, in late June and mid-July, which left about 2,500 people dead.

Europe fried in record heat. Temperatures of 42.6˚C were recorded at Lingen in NW Germany, 41.8˚C in northern Belgium, and 38.7˚C in the eastern English city of Cambridge.

The second half of July and beginning of August 2018 saw very high temperatures across much of Europe and rivers running dry due to drought.

The Danube fell to its lowest level in 100 years in some areas, notably exposing World War II tanks in Serbia that had been submerged since the conflict.

Much of Europe, but especially the south, baked from late June to well into August.

It was heatwave after heatwave throughout the summer of 2015, which left an estimated 1,700 people dead in France.

In the UK, roads melted and trains were delayed in the hottest July on record, with temperatures reaching 36.7˚C at Heathrow airport.

Central and southern Europe were parched by drought throughout June and July, provoking a spate of forest fires in Italy, North Macedonia and Serbia.

In Hungary, 500 people died as a result of the heat. In Greece, the worst fires in half a century – some believed to be the result of arson but others the product of heat and drought – consumed 4% of the country’s forests.

The UK, France, Italy, Spain and Portugal all experienced exceptional heat in the first half of August, with Portugal suffering a record 47.3˚C at Amareleja in the south.

A European Union study of 16 nations puts the number of excess deaths across the bloc during that heatwave as high as 70,000, with France and Italy each seeing between 15,000 and 20,000 fatalities, according to various reports since.

In France, most of the victims were elderly people left to fend for themselves in an episode that traumatised the country and lead to the implementation of new systems to protect vulnerable people during heatwaves.