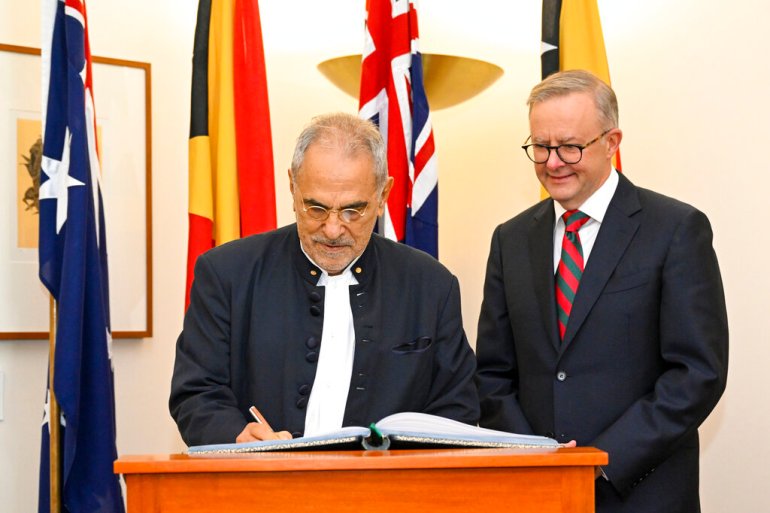 Give our country $100bn – or stop lecturing us about making money from fossil fuels.

That was the message East Timor President and Nobel Peace Prize winner José Ramos-Horta had for those in the West raising environmental concerns about his nation’s proposal to build a new gas-processing plant.

The East Timor leader is hoping for a breakthrough during his visit to Australia on a long-stalled project with Canberra to develop the Greater Sunrise gas fields, which lie beneath the seabed separating the two countries.

Long touted as a joint venture between the two countries, the two fields that make up Greater Sunrise were discovered in 1974 and hold an estimated 5.1 trillion cubic feet of gas and 226 million barrels of condensate, a type of light crude oil typically found with gas.

But exploration has been stalled due to disputes over maritime boundaries and whether the gas should be refined in Australia or East Timor.

Ramos-Horta said that Indonesia, South Korea, Japan and China could all be interested investors.

He named the countries as potential alternative suitors as he pushed Australia over the project, and the thorny issue of where future gas would be processed.

Dili is looking to pipe the gas to East Timor – where it expects more economic benefits from a new liquefied natural gas (LNG) plant. Australia wants the gas piped to an existing LNG gas hub in its northern city of Darwin.

Ramos-Horta said it made no sense to him to send the gas to Darwin, which would require a 500-kilometre (310-mile) pipeline, rather than to East Timor with a 200 km pipeline and added that operating costs in Timor would be much less than in Australia.

A reporter asked how East Timor could justify the LNG project given the climate impacts.

Ramos-Horta replied that gas was cleaner than some fossil fuels, and he listed countries that had benefited from those fuels, including the US and Japan, and then later China and India.

“But first the Europeans, you were the ones who polluted the whole world with coal, with oil, and everything that you can imagine,” he said.

“And we, unfortunately, discover oil and gas only now. And the Europeans are lecturing us: We have to move away from fossil fuel.”

He said the gas field could generate $100bn or more in revenue.

“I have no authority to make any proposal, but I can make one off the top of my head,” Ramos-Horta said. “The Europeans, Australia, the US, give us $100bn and we give up on the Greater Sunrise development. As simple as that.”