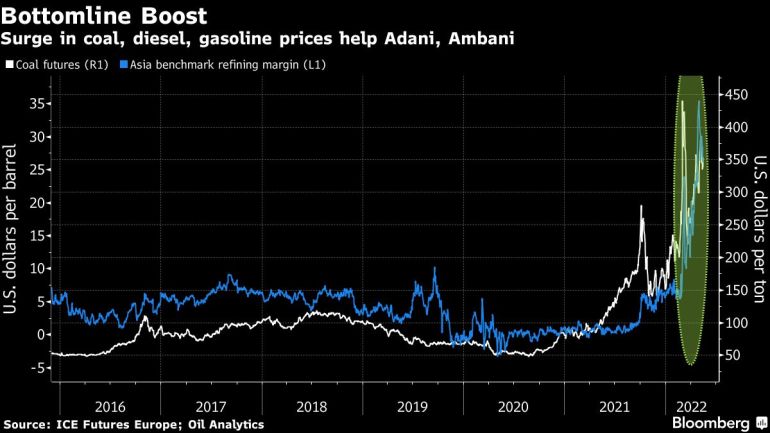 Gautam Adani and Mukesh Ambani are profiting from a surge in global commodity prices triggered by Russia’s invasion of Ukraine, burnishing their fossil-fuel credentials even as Asia’s richest men publicly push their pivots toward greener energy.

With coal prices skyrocketing to a record, Adani’s conglomerate is expanding a controversial mine in Australia to meet demand.

Ambani’s Reliance Industries Ltd. is snapping up distressed crude-oil cargoes at discounts to feed its refining complex, the biggest in the world. Reliance even deferred a scheduled maintenance of the facility to help churn out more diesel and gasoline, whose margins have shot up to touch a three-year high.

Refiners in India exported 3.37 million tons of diesel in March, the highest since April 2020, when overseas sales were a record 3.4 million tons as local demand plummeted during the Covid-19 lockdown, according to data on Petroleum Planning and Analysis Cell’s website. Gasoline exports reached a five-year high of 1.6 million tons.

Coal has seen an equally strong comeback in recent months. “People had begun to write coal’s obituary two-three years back, but today, it seems, coal’s days are not over yet,” Pramod Agrawal, chairman of state-miner Coal India Ltd. told investors this month.

For first-generation entrepreneur Adani, coal is central to his empire. He has invested more than $3 billion in coal mines in India, Australia and Indonesia. His Carmichael mine in Queensland, which has been a target of environmental activists including Greta Thunberg for years, started shipping the fuel only this year.

In a May 4 earnings call, Adani Enterprises said it plans to raise the annual capacity of the Carmichael mine to 15 million tons in the year through March 2023, about 50% more than what its board approved for the first phase of the project. It plans to export as many as seven capesize cargoes a month, director Vinay Prakash said on the call.

The “geopolitical situation” is expected to keep coal prices strong for now, but how long this lasts is “anyone’s guess,” Prakash told investors.