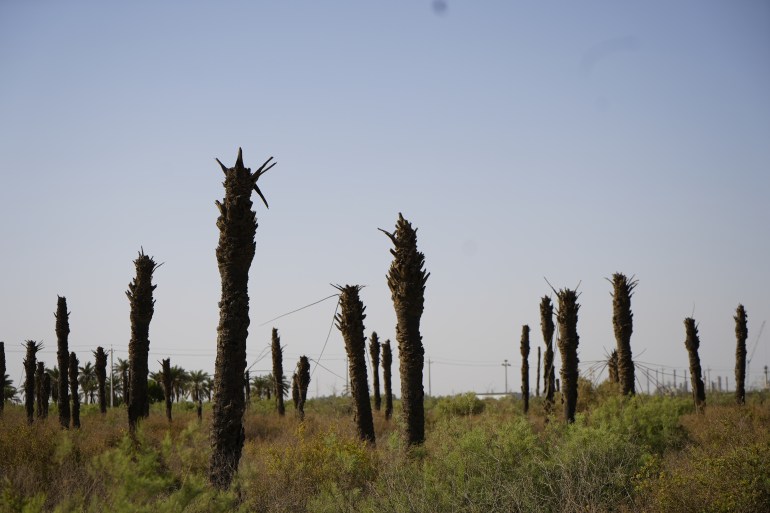 Basra, Iraq – Southern Iraq was once known as the “black land” – the vast swaths of palm trees blocking out everything else, and providing food, shelter, and shade.

But the palm trees, as well as fruit trees and vegetable farms, have now mostly disappeared in and around the southern port city of Basra. Instead, real estate projects have taken over, as well as deserts.

The effect of climate change on agricultural land in Iraq, including rising water salinity and higher temperatures, has forced many farmers to turn to building and selling houses – but while that can lead to profits and cash in the short term, it is also deepening Basrawis’ vulnerability to climate disasters.

Farmers said they have no choice.

“I am one of many farmers who had to stop farming because of climate change, and a lack of government support,” said Fouad Kadhim, next to a dead palm tree in Seeba, a town outside of Basra. “Palm trees used to cover my land – two hectares [five acres], but now they have all died.”

Kadhim pointed out that the increased salinity of the Shatt al-Arab river, Basra’s main water source, waste products in the water, and air pollution as a result of Iran’s Abadan oil refinery across the border, had all negatively affected his land.

“What is heartbreaking is that I see these palm trees cut off and moved into restaurants to be used later as firewood for cooking purposes, and the lands either ignored or used for houses,” Kadhim told Al Jazeera.

Kadhim used to grow pomegranates, figs, olives, oranges, and other fruits and vegetables. His land has now turned into a desert.

“It was not only an orchard but also a place to have rest and breathe fresh air, just like the Garden of Eden, but today it has become a cemetery of dead palm trees,” Kadhim said.

Like Kadhim, farmer Abdulsaheb Ismail also has to deal with the after-effects of this phenomenon.

“In previous years, the water was fresh and the land was fertile, but because of the [increase in water salinity] lands have dried out and the soil has turned into a desert. Basra is not a green land like it was in the 1970s,” Ismail told Al Jazeera.

Iraq’s Ministry of Agriculture has acknowledged the difficulties facing farmers, but said that the ministry simply does not have enough money to help.