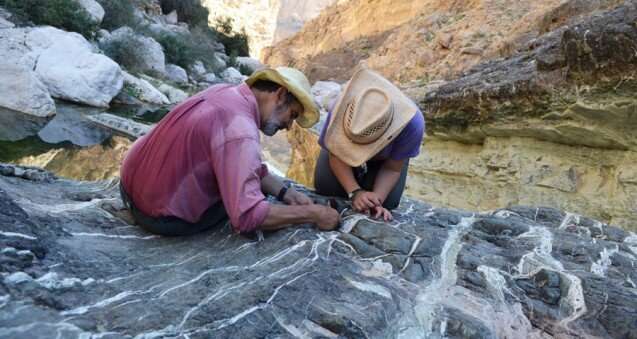 In addition to drastically cutting global fossil fuel emissions, society needs to develop and use technologies to remove the CO2 already in the atmosphere.

Geologist Peter B. Kelemen is a research scientist at Lamont-Doherty Earth Observatory and the Arthur D. Storke Memorial Professor in the Department of Earth and Environmental Sciences. He has been a key architect of the Oman Drilling Project, an initiative involving more than 200 international scientists from disciplines such as geophysics, geochemistry, geology, biology, and physics who are working on research topics related to a unique geological feature in the Oman desert. In this region, the oceanic crust and its underlying mantle rocks have been thrust up onto the surface, creating the largest on-land exposure of ocean crust and upper mantle in the world.

Atmospheric CO2 spontaneously reacts with rocks from the Earth’s interior, the mantle, to form “carbonate” minerals, both removing CO2 from air, and permanently storing it in solid form. This is driven by the chemical energy due to disequilibrium between mantle rocks and the atmosphere.

“We wanted to figure out the cheapest way to take carbon dioxide out of the air and we came up with something very simple: Take limestone, cook it. Now you have CO2, to store or use, and calcium oxide. Put the CaO out in the weather. It will draw down CO2 from air, to make limestone again. Repeat. This is so simple, it is almost stupid. But we are finding that we can convert 75% of CaO to limestone in less than two weeks, just reacting with air in the lab. And, because the process is so simple, it currently has the lowest peer-reviewed cost estimate, of any proposed method for direct air capture.”

Two start-up companies are putting Kelemen’s innovation to work. Heirloom Carbon Technologies based in California is committed to removing one billion tons of CO2 from the air by 2035 by “looping” CaO and CaCO3, as described above.

Meanwhile, 44.01, based in Oman, is focusing on storing CO2 removed from air, by forming solid carbonate minerals below the surface.