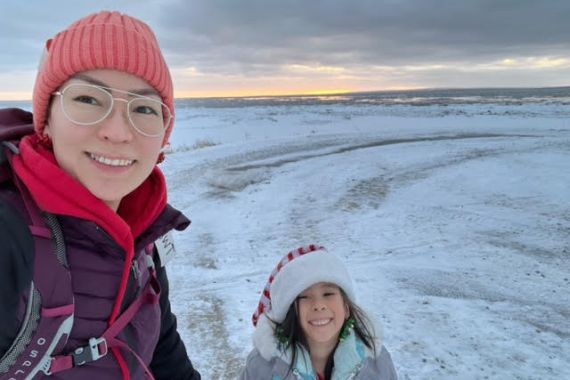 It was when the US Bureau of Indian Affairs built schools in Alaska, as part of an effort to assimilate Indigenous peoples into white culture, that the community was forced to relocate to the Newtok site. The town was established on what was, at the time, the furthest point up the river a barge could navigate to offload school building materials.

Newtok was constructed on permafrost, ground that is frozen all year, which makes up the majority of land in the north. It covers an estimated 23 million square kilometers (9 million square miles) in areas like Alaska, Canada, Greenland and Russia. For thousands of years, a cold climate has kept the land frozen but global heating is thawing the ice trapped inside the soil and sediment.

Across the Arctic, the permafrost is collapsing, threatening the buildings, roads, pipelines and traditional hunting and trapping territories. Permafrost also stores methane, which is released as it melts, contributing to climate change.

When George, 39, was a girl, the permafrost was intact: “The land was lush and high. The river was narrow and deep.”

But over the years, the land began to slump. “The river is widening and getting shallow. And everywhere you walk is wet now. It’s not dry like it used to be,” she said.

All that water is encouraging mould growth in homes. Floods have spread raw sewage throughout the community. Children experience asthma and impetigo, a rash caused by bacteria.

Newtok has been planning to move for decades. The relocation finally began in October 2019, when 21 households with 140 adults and children moved to Mertarvik.

Cox estimates that one-third of Newtok’s population has already moved to Mertarvik, a new community on Nelson Island, a volcanically-formed island not vulnerable to the same level of erosion.

The entire relocation plan for Newtok will cost $160 million.

In 2016, the Jean Charles Choctaw Nation, on Isle de Jean Charles in Louisiana, became the first federally funded effort to move an entire community due to climate change.